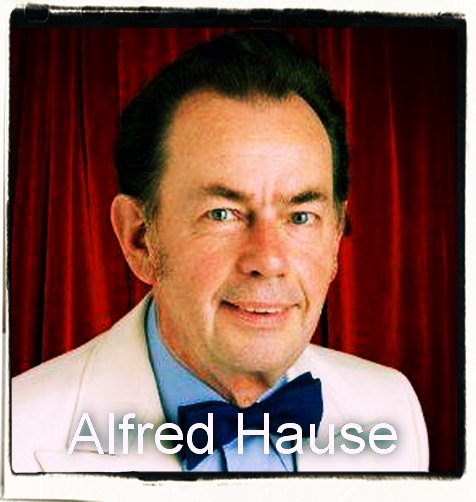 Alfred Hause (born August 8, 1920 in Ibbenbüren, † January 14, 2005 in Hamburg) was a German violinist, conductor and Kapellmeister. The “German Tango King” played a major role in the direction of popular music in Germany after the Second World War. He created his legendary “Continental Tango Sound”.

Alfred Hause – who had the so-called perfect pitch – already developed his musicality during school time, and he showed a special talent for playing the violin. As the son of a shipbuilding engineer, he should have embarked on a technical career after attending secondary school in Dortmund, but Alfred Hause decided to study classical music at the Weimar Conservatory.

He added the saxophone, clarinet and piano to the violin and earned his tuition money through student jobs, as a member of a dance orchestra, which eventually developed and manifested a preference for light music. After completing his studies, he played at home in Berlin with dance orchestras that were popular at the time: saxophone with Peter Kreuder, Franz Grothe and Georges Boulanger, violin and saxophone with Willi Stech, Otto Dobrindt, Hans Bund, Juan Llossas and Kurt Widmann.

As of 1941, Alfred Hause, as well as Helmut Zacharias and Bert Kaempfert (both later employed as radio operators), had to serve as military musicians in the Wehrmacht. He was assigned to Hans Teichmann, staff music corps of the Air Force – with public appearances and regular broadcasts of military but also classical music on the German broadcaster. In 1944, Hause was assigned to the western front and was taken prisoner by the English in the spring of 1945 (in the meantime his apartment had been bombed and looted in his last place of residence, Berlin).

Immediately after his release in October 1945, he went to Hamburg on the basis of an advertisement “with a borrowed violin” and applied to the N(W)DR. In the same year he became a violinist in Willy Steiner’s Radio Dance Orchestra Hamburg. Steiner had set up this ensemble in Hamburg for the Northwest German Broadcasting Corporation (NWDR). In 1946 he became concert master and soon after led his own string section within the orchestra, in 1948 under orchestra director Harry Hermann. In 1949 Kurt weg replaced the house and took over the direction of the dance and entertainment orchestra of the NWDR, which was taken over by the NDR in 1955, popular soloists including: trumpeter Werner Gutterer, trombonist Günter Fuhlisch, guitarist Martin Böttcher, bassist Hans “James” Last (also arranger for Alfred Heimat and Franz Thon).

Hause became known through numerous radio and vinyl recordings as well as appearances in the television programs of Peter Frankenfeld and Hans-Joachim Kulenkampff, as well as in numerous radio programs by Hans Rosenthal, later also in the Sunday morning program Hamburger Hafenkonzert as successor to Hans Freese and predecessor of Günter Fuhlisch. In 1961 he won first place with his orchestra and the title “Bailando a dos” at the first German Schlager Festival in Baden-Baden. Well-known pop singers accompanied at home such as Freddy Quinn, Rudi Schuricke, René Carol, Detlev Lais, Lonny Kellner, Friedel Hensch and the Cyprys, Peter Beil, but he also composed pop music himself.

From 1965 to 1989 he and his orchestra performed more than 100 concerts in Japan, which Polydor performed in collaboration with Nippon Grammophon Co. He was also successful with his music in other countries, especially in South Africa, Morocco, Italy, Spain, Scandinavia and Argentina. In collaboration with Arne Domnérus, Joe Heider (alias Alfie Khan) and Yusef Lateef, Alfred Hause experimented in the direction of a synthesis of symphony and jazz elements. At NDR he stayed at home until his retirement. Hause was a voluntary curator of the Paul Lincke Society. On December 29, 1995 he received the Federal Cross of Merit.

The journalist Horst Lietzberg characterized Hause in his articles in the Hamburger Abendblatt as a sensitive, reserved person and enthusiastic family man (in 1972 he even took his wife and children to Japan with him). In addition to his musical talent, his technical interest was also expressed in his enthusiasm for sleekly constructed cars, and he had made the floor plan for the single-family house in Hamburg-Wellingsbüttel himself according to his own ideas. In 2005 Alfred Hause died after a long illness. His urn is in the nearby Hamburg cemetery Ohlsdorf in the columbarium of Chapel 11 on the right front side.

Songs of Alfred Hause you can hear at Instrumentals Forever: