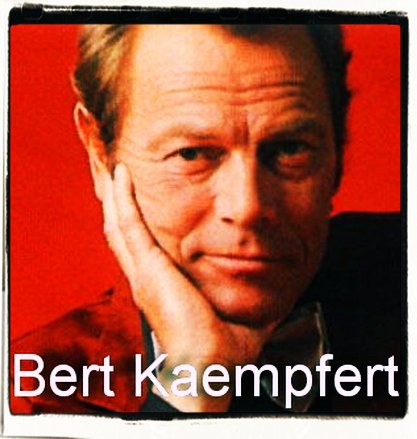 Bert Kaempfert, born Berthold Heinrich Kämpfert (Hamburg, October 16, 1923– June 21, 1980) was a German orchestra leader, multi-instrumentalist, music producer, arranger, and composer. He made easy listening and jazz-oriented records and wrote the music for several well-known songs, including “Strangers in the Night” and “Moon Over Naples”.

Kaempfert’s own first hit with his orchestra had been “Wonderland by Night”. Recorded in July 1959, the song couldn’t get a hearing in Germany, so Kaempfert took the track to Decca Records in New York, who released it in America in the fall of 1960. With its haunting solo trumpet (by Charles Tabor), muted brass, and lush strings, the single topped the American pop charts and turned Bert Kaempfert and Orchestra into international stars.

Over the next few years, he revived such pop tunes as “Tenderly”, “Red Roses for a Blue Lady”, “Three O’Clock in the Morning”, and “Bye Bye Blues”, as well as composing pieces of his own, including “Spanish Eyes” (a.k.a. “Moon Over Naples”), “Danke Schoen”, and “Wooden Heart”, which were recorded by, respectively, Al Martino, Wayne Newton, and Elvis Presley. For Kaempfert, little may have brought him more personal satisfaction than Nat King Cole recording his “L-O-V-E”.

Recordings by Bert Kaempfert you can hear at Instrumentals Forever: