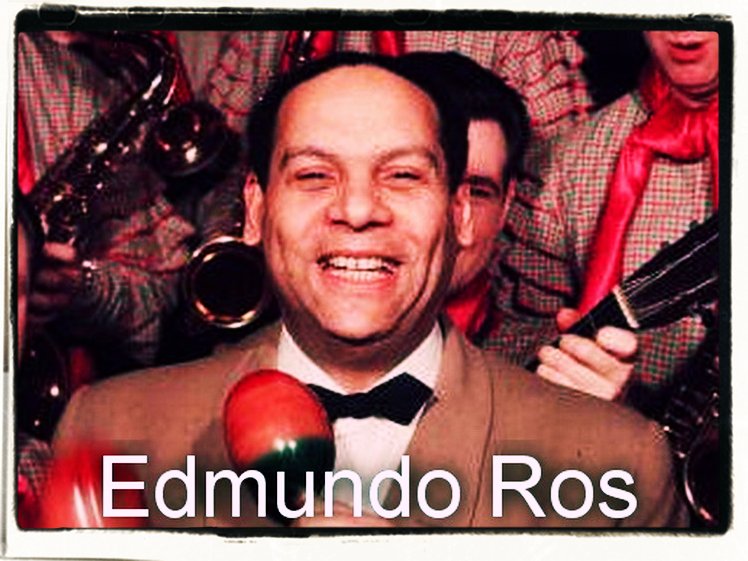 Edmundo Ros, born Edmund William Ross (Port of Spain, December 7, 1910- Jávea (Alicante, Spain), October 21, 2011), was a Trinidadian-Venezuelan musician, vocalist, arranger and bandleader who made his career in Britain. He directed a highly popular Latin American orchestra, had an extensive recording career and owned one of London’s leading nightclubs.

He played drums in the city’s nightclubs and in the Martial Band of Caracas as well as was soon hired by Sojo as timpanist in the new Venezuela Symphony Orchestra. In August 1940, Ros formed his own orchestra, performing as “Edmundo Ros and His Rumba Band” at style of Lecuona Cuban Boys directed by Armando Oréfiche. In 1941 he cut his first tracks with Parlophone, the first number being “Los Hijos de Buda”. The band played regularly at the “Coconut Grove club” in Regent Street (owned by Ros from 1951), attracting members of London’s high society and Royal family.

In the early 1960s, he collaborated with the Ted Heath orchestra on the album Heath versus Ros (Decca Phase 4 1964) that exploited the relatively new stereo recording process. The shift in musical tastes to rock bands as The Beatles and The Rolling Stones affected Ros’s standing but he played on into the 1970s. In 1975, during Ros’s seventh tour of Japan, his band’s Musicians’ Union shop steward tried to usurp Ros’s authority by making arrangements with venues behind his back.

Upon their return to the UK Ros organised a celebratory dinner after a BBC recording session and announced the disbanding of the orchestra. He destroyed almost all the charts (arrangement sheets), which conclusively ended the orchestra’s existence. In 1994, Edmundo conducted and sang with the BBC Big Band with Strings at the Queen Elizabeth Hall in London. The other conductor was Stanley Black.

The concert was broadcast over BBC Radio 2 and it was such a success that a Japanese recording company invited them into a recording studio in London to make yet another Edmundo Ros CD.

Recordings by Edmundo Ros you can hear at Instrumentals Forever: